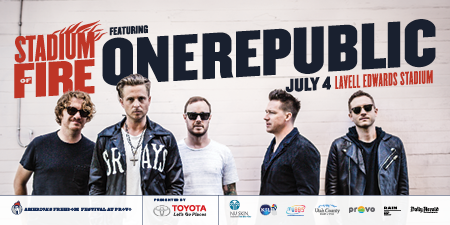 We at BYU would like to invite you to join us for a wonderful event and experience you soon won't forget. Each year LaVell Edwards Stadium at BYU hosts the annual "Stadium of Fire" event. It is on and around the 4th of July. The theme is centered around the 4th of July, patriotism, and fun. This year’s program will be OneRepublic, one of the world’s most popular musical groups for more than a decade, will be the headliner at Stadium of Fire on July 4th, 2018, at LaVell Edwards Stadium in Provo, Utah! In addition to OneRepublic, guests will enjoy the beloved patriotic tributes and exciting thrill acts that Stadium of Fire is known for—as well as the largest stadium fireworks show in the nation!

We feel this would be a great opportunity for many to come see a stadium concessions operation in action with over 40,000 in attendance and at a time other than football season. We open over 50 locations with all types of food and vendors. Here is a link to a map which shows our 2017 offers. 2018 will be very similar.  http://dining.byu.edu/concessions/documents/LVEStadiumConcessionsMap%202017.pdf. We open three sides of the stadium, north, east and west. The stage is set in the south end-zone. Here is a link to our concessions web site for additional info: http://dining.byu.edu/concessions/.

At its basic level, the top selling food items will always be the staples: Hot Dogs, Nachos and Popcorn. No matter how large and expansive your menu is, these Concessions’ favorites will always lead the charge. However, by offering a limited menu selection, are you losing potential Customers and sales by Customers choosing to purchase from outside vendors or eating elsewhere before or after the game? Through evidence over the past two seasons, I firmly believe that you can increase your operations’ revenue through investing in new equipment and strategically expanding the options available to Customers at the game.

As I transitioned back into Concessions at North Texas during the 2015 football season, I felt that the simpler menu mix offered at the time did not meet the demand and needs of our Customer base. The limited menu did not capitalize on the captive audience available at home football games. Our revenue was capped because fans were choosing to purchase more items from outside vendors, or eating before/after each game. Therefore, I revamped the menu and launched a new Concessions lineup starting with the 2016 Football season. Instead of selling only Hot Dogs, Nachos, Frito Pies, and Cheeseburgers, we were able to offer Brisket Sliders, Brisket Nachos, local Hickory Smoked Sausages, Bratwurst, Jalapeno Cheese Tortilla Wraps, Philly Cheesesteak Sandwiches, Grilled Chicken Sandwiches and Personal Pizzas.

By: Chris Lauber, University of North Dakota at R.E Arena

Changing your menu to keep up with trends and new food items is always a good thing. Changing an entire stand concept is a whole other animal. Will the new concept work or flop? How much will it cost to implement? What is the concept? These are just of few of the questions you will face if you change the entire concept and menu of a stand. Having just finished my first season at Ralph Englestad Arena (Home of UND Hockey), I’m starting to work on ideas for the next season. One idea that I thought of was an “All Day Breakfast Stand.” Why you ask? All day breakfast is not a new concept but it has been gaining steam over the last couple of years with various restaurants adding it to the menu. In addition I found myself having to add breakfast menu items to a stand several times this past year for a variety of events. That is when I thought, why not turn a stand into an All Day Breakfast Stand? As I floated the idea around I got very positive results. Some items that have been put on the proposed menu include: breakfast sandwich, plate of hash browns, breakfast street tacos, big bowl of cereal, breakfast burger, and of course milk and orange juice. As many of us wind down our seasons and go into the summer and start to work on next year’s plans, keep in mind the trends you see in the industry and the problems you face in your account and see if you can create a concept for a stand that could be the next big hit for your operation. Stay tuned as I will be posting updates on how the stand goes.